Who would have thought that someone who didn’t start competitive dressage riding until 7 years ago would be invited by British Dressage to ride for their country at international level?  Well, that is exactly what has happened to Tyler Bradshaw BHSAI. INT.SM from Tiverton in Devon who recently received her first invitation from the sport’s national governing body to compete at small tour Prix St George Intermediate I level with her two top horses Igor VII and Gijsbert. 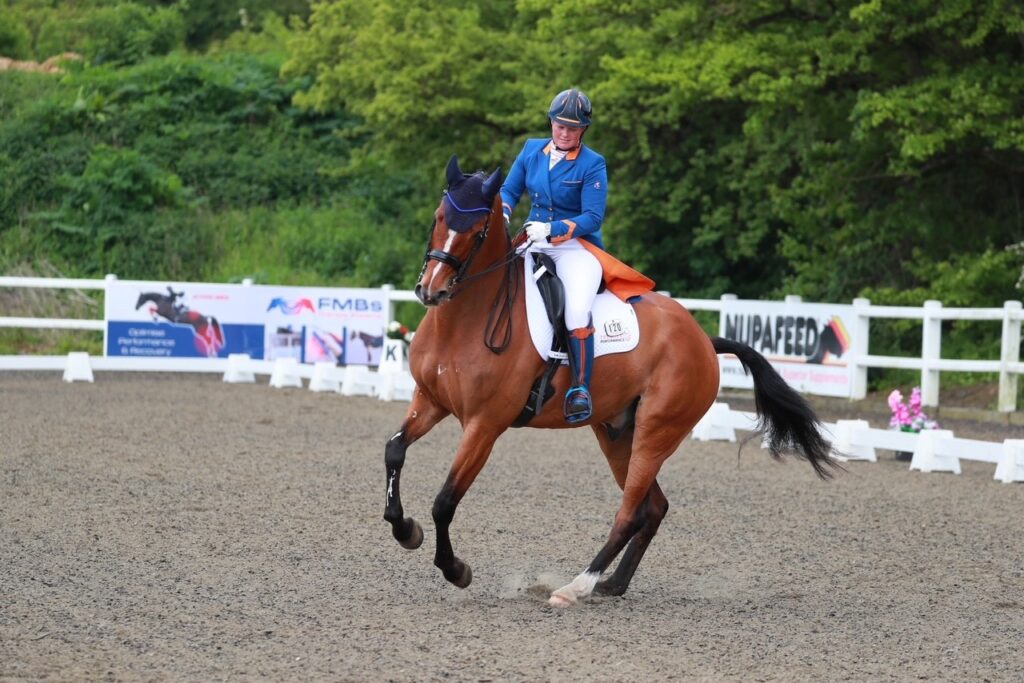 Igor and Gijsbert (Bert) are both Dutch bred horses who were backed and trained by Tyler. She says, “they both came to me un-backed and I have worked hard to get them where we are today but they are fantastic horses with exceptional talent”.

Tyler didn’t start her riding career until she was 21 after completing a scholarship at the internationally acclaimed Tallend School of Equitation. She admits that when she was younger, she only every won “well tried” rosettes at pony camp. Tyler says “I was terrified of riding and useless but my parents had horses and so I took my pony club horse for a dressage lesson. I turned up with my GP saddle and the instructor asked me where my dressage saddle was – I replied what is a dressage saddle?”

That has certainly all changed now!  Tyler runs a hugely successful Livery yard business, Mill Lane Livery in Tiverton, as well as being a professional GBR Dressage rider.  She is a highly qualified and much in demand riding coach, has her BHSAI, Stage 4 Care with distinction, is competing for England and is affiliated with British Dressage.

Tyler has an impressive string of horses that have been produced by her from un-backed, who are working at various levels within British dressage, premier leagues, and CDI.

Not bad for a relative newcomer to the sport!

It is no mean feat to compete at this level. Tyler has ridden both Igor and Bert at premier league, high-profile events against the best competitors in the UK and internationally.  Tyler says “Being invited to ride on the small tour Intermediate Level 1 at team GB level is so exciting! Each conquest is everything I have always wanted but once I have achieved it, I move onto the next challenge. I have just competed at a CDI*** event, and I want to go as far as I can.  My aim is the World Equestrian Games, The European Championships and the Olympics one day – fingers crossed”. 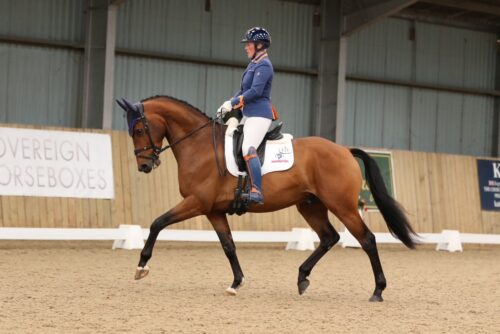 “I have had to work really hard to get where I am today, but I have fantastic support from my parents. I don’t have any financial support and have to train in a 25 x 45 school whereas tests are ridden in a 25 x 60 school – that can be a challenge, but I am saving hard to one day have a bigger school”.

Tyler trains with British dressage rider, trainer and Olympic judge, Peter Storr.  Peter is a 5* level dressage judge who competed at the 2001 European championships in Verden, Germany and at the 2002 FEI world Equestrian Games in Jerez de la Frontera, Spain. He was also on the 2002 and 2004 British Olympic teams.

Peter and Tyler are working with Igor and Bert at Grand Prix intermediate 2, and both feel that they have the talent to compete at this level comfortably.

However, Tyler is very pragmatic and says, “if I feel any of my horses don’t want to move up a level or have had enough of competing then I won’t force them to – they have to want it as much as I do”.

Tyler is also bringing on her 2 other horses, Jaeger who she has had from a foal and Midorya who came to her as a 2-year-old. Jeager is now 5 and competing at elementary. Tyler tells us he is very sharp but has a lot of talent. Midorya, now 4, only started competing in January at prelim and novice.  Both youngsters qualified for the Summer Regionals and Jaegar did particularly well at the Nationals coming 4th with a score of over 70%.

Tyler’s specialty in producing young horses is renowned and she has a sharp eye for equine biomechanics. She watches how the horse works and moves and can feel when they have asymmetry or a lack of symmetrical push. This is how Tyler came to find out about McTimoney Animal Chiropractic techniques and why she now has all her horses regularly treated by McTimoney practitioner Nikki Routledge.

McTimoney chiropractic treatment works by assessing the asymmetry within the body, using bony landmarks in the spine, pelvis, and feet to determine where treatment needs to be targeted.  By improving the symmetry to the spine and pelvis, improved joint function can return, tension in the muscular and soft tissues is released and the horse feels much more comfortable again. Combined with individually bespoke rehabilitation exercises, the treatment can provide long-term benefits by promoting improvements in muscular strength and joint function which support rather than compensate for the original issues such as arthritic hocks and conformational limb length differences.

Tyler initially contacted Nikki Routledge, McTimoney Practitioner as Gijsbert (Bert) had bilateral deviations behind. He has spider plates on his back feet that are replaced every 4 weeks and has an unusual shape sacroiliac joint (SI), his pelvis and lumber region needed chiropractic treatment to keep him comfortable.

Nikki treats Tylers top horses, Igor and Bert as well as her two upcoming youngsters Jaeger and Midorya. She also performs regular check ups on her schoolmasters that Tyler uses to teach her clients.

Treatment intervals vary with the workload the horses are in, but they are generally seen before every major competition and regional competition to ensure that they are feeling their best. This means they are treated every few weeks for those competing and every couple of months or so for the schoolmasters.

Bert has been treated by Nikki for a couple of years and she says that “he has changed so much since then – his training and Tyler’s dedication to success with Bert even though he can be tricky, have resulted in an absolutely stunning horse with a huge amount of top line and core strength. Treatment is focussed on maintaining pelvic symmetry, which was initially variable, but now he is so much stronger rarely needs correcting, and spinal mobility alongside releasing muscle tension through the paravertebral muscles. Any horse working at this level and intensity needs constant fine-tuning to keep every part of the muscle chains and skeletal system working optimally so treatment is targeting those areas where it is needed and individualised”.

“Bert and Igor have changed shape significantly over the last two years, predominantly due to the training they have undergone but we have also focussed on the key areas for each horse that needed attention. For Bert, this was continually building the strength over his top line, pelvis and particularly the lumbar musculature and mobility; for Igor it was also top line but also encouraging him to stretch more through his undercarriage too which we think may have been affected by his earlier episode of peritonitis when he was a youngster and necessitated surgery. I got a message from Tyler after Igor’s first treatment to say he had suddenly started to extend more”.

If McTimoney practitioners see any issues or have concerns about the horses they treat, their gait or symptoms, they will always discuss these with an owner and if necessary, with the vet. Nikki said “Tyler’s vet Simon from Western Counties Equine is fantastic, and Tyler is highly knowledgeable so on the odd occasion where there has been a potential issue, I have been able to leave it with Tyler to discuss with Simon and we go from there. However, with other clients, I have contacted the vets myself to report my findings as part of the necessary vet-led team we are all part of”.

“Tyler’s rise to the level she is at now has happened in such a relatively short time that I think that also speaks volumes for the work she has put in. Tyler’s family help and support her but she has had to do it all from very humble beginnings and Tyler brings this down-to-earth understanding to everything she does to help her clients too”. 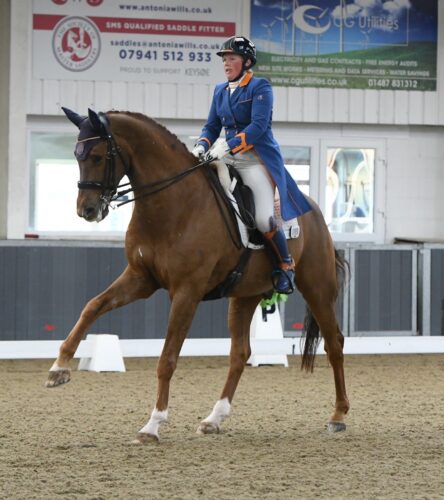 Of Nikki, Tyler says “Nikki and I speak the same language. I like the facts behind McTimoney, the scientific nature of it, understanding the biomechanics, musculature, and musculoskeletal workings behind it.  We can compare notes and find a way in which we get an end result where Bert and Igor can be really comfortable and working in a way where they are correct. They are competition horses and use their bodies the same way any athlete would, so we try to take away the pressures of the workload. Nikki is always there for me if I ever have questions and the reports, she produces are excellent because I can use them as a point of reference”.

“I recently changed my saddles over and they are bespoke for the horses now. We did a lot of work to see how these saddles have helped asymmetry and had they changed the horse’s way of going, have they improved or have they got worse. Having all that information enabled me to go back to and review the data. McTimoney has made a huge difference, it is incredible, and the work is so specialised and correct for what we do in our industry”.

Nikki Routledge MSc PGCLT FHEA MMAA AHPR Regd, McTimoney Animal Therapist, treating horses and dogs across Devon and Somerset. Nikki combines 20 years of experience treating a range of animal clients with teaching in Higher Education for the McTimoney College of Chiropractic and Bridgwater and Somerset College. Nikki is Chair of the McTimoney Animal Association, a member of the Animal Health Professions Register, and a Fellow of the Higher Education Academy. Nikki has previously competed Internationally in endurance riding and now competes British Dressage at Novice level, runs the occasional marathon and has raised money for several different charities. Contact Nikki on 07890 968115

If you would like to know more about how to train as a McTimoney Animal Practitioner, please visit the McTimoney College of Chiropractic at https://www.mctimoney-college.ac.uk/postgraduate-studies/msc-animal-manipulation/

For more information on the McTimoney Animal Association and to find a practitioner near you go to https://mctimoneyanimal.co.uk/

McTimoney Animal Association sponsors the Saddle Research Trust’s SRT2021 Conference »
« Free Webinar: Use of Chiropractic in the Veterinary Industry – Asymmetry of the Pelvis

*Client Progress*Meet the beautiful Freyja. For some time she had been suffering with pain down her hind leg, so much that she was biting her own leg.After specialist vets and scans couldn't find anything specific she turned to a combination of chiro, hydro and massage.After just her second session with me Freyja was walking straighter, sitting properly like she had never done before and even using her left leg to climb onto the sofa, something her owner had noticed she hadn't done her whole life!With maintenance we hope Freyja continues to thrive and never bite her leg in pain again!#mctimoneyanimalassociation #mctimoney #peakdistrict #sheffielddogs #dogsofsheffield #dogsofyorkshire #sheffield #dogsofinstagram #dogchiropractor #weimaraner ... See MoreSee Less