Multiple issues affecting asymmetry were identified and a combined veterinary and McTimoney approach achieved a successful outcome for the owner.

Catherine Henderson contacted McTimoney Animal Practitioner Liz Harris in July 2015 when Pepper, her 15.2hh American Quarter Horse was 13 years old and had already been out of work for 11 months.  Catherine had tried other rehabilitation work but was still finding that she was unable to keep Pepper comfortable and was facing the real possibility of having to retire her. Pepper wasn’t going right and showed resentment to being tacked up and mounted, sometimes turning around and biting her rider’s foot.

Catherine said, “Pepper was diagnosed with kissing spines at the age of 6 and had an operation removing one spinous process to create more space within her spine. She recovered from the op but was still showing some resentment to being ridden.  It very quickly became apparent that this was not Pepper’s only issue and that she was in fact very asymmetrical. Further investigations showed that Pepper’s right foreleg was minimally shorter than her other three legs and this caused her a great deal of difficulty throughout her whole body.  She also showed signs of early onset arthritis in her right hock”.

Liz Harris explains, “Radiographs taken in 2014 showed vertebral crowding at the caudal wither and lumbar area, and she had some degeneration in the right hock.  Having also been diagnosed with a shorter right foreleg in comparison to the left fore, she had been wearing a raised shoe on the right fore for several years, although by the time I saw Pepper she had been barefoot for a year.  The quality of her hoof had deteriorated while wearing shoes and the farrier was working on correcting the shape of her front hooves, which were very flat, cracked, and flared. Issues such as these can cause ongoing compensations throughout the body, resulting in limited joint mobility, tightening of the muscles to protect the joints unable to function correctly and discomfort for the horse”.

McTimoney chiropractic treatment works by assessing the asymmetry within the body, using bony landmarks in the spine, pelvis, and feet to determine where treatment needs to be targeted.  By improving the symmetry to the spine and pelvis, improved joint function can return, tension in the muscular and soft tissues is released and the horse feels much more comfortable again. Combined with individually bespoke rehabilitation exercises, the treatment can provide long-term benefits by promoting improvements in muscular strength and joint function which support rather than compensate for the original issues such as arthritic hocks and conformational limb length differences.

At the first session Liz identified and treated a pelvis misalignment (ventrocaudal on right hand side) and various misalignments throughout the cervical and thoracolumbar spine. Pepper’s right scapula was misaligned cranioventrally.  These areas were all treated with McTimoney chiropractic adjustments. Pepper had significant muscle tension present in the neck and shoulder area on both sides, which was more painful on the right-hand side. Longissimus dorsi was mildly tense bilaterally and she was tender when adjusted in the lumbar area.  Liz left Pepper’s owner with an exercise plan and instructions to carry out a programme of stretching exercises.

Catherine said that although Pepper seemed guarded to begin with, she soon relaxed during the treatment and seem to quite enjoy it.

Following the first treatment and a day or two of rest advised by Liz, Catherine reported an immediate improvement.  She said, “I couldn’t quite believe the result. Pepper had built up a lot of resentment towards me saddling up/getting on and moving off.  The initial saddling up and getting on seemed a lot calmer, it wasn’t without some resentment as Pepper had learned over a long period that this usually hurt. She was still bracing herself to a degree but then took a step forward and walked off with no issues.  I was in disbelief. Prior to Liz’s treatment, Pepper would have her back braced, ears back, and would be trying to bite my toes if I dared ask her to move forward with my legs.  This time was very different.  We took Liz’s advice and started slowly and built things up over a number of weeks. Pepper went from strength to strength; she had never gone this well before for a prolonged period.  I knew then that I had found something that worked for Pepper’s conditions and was so pleased, because she was just about to become the prettiest grass ornament ever!”

Catherine was able to bring Pepper back into work, and Liz continued to see Pepper every three to six months until August 2016, when she was reluctant to go forward and had developed an intermittent lameness on the right hind.  After a session Liz identified increased soreness in the pelvic area, hamstrings, gracilis, transverse abdominals and longissimus dorsi. Liz was concerned as this did not fit Pepper’s usual “pattern” of tension. Liz says, “I advised that the vet should be contacted if no improvement was seen. Shortly after this the vet confirmed that the arthritis in Pepper’s right hock had advanced, and she had her hocks medicated.  This did not need to be repeated until July 2019”.

McTimoney Animal Practitioners are highly trained and where are new pattern of compensation and asymmetry is identified, may refer to another paraprofessional such as the vet, sadder or dentist depending on the individual case requirements.  This is very important as it ensures the best welfare for the horse involved and may also result in less cost for the owner in the long term. 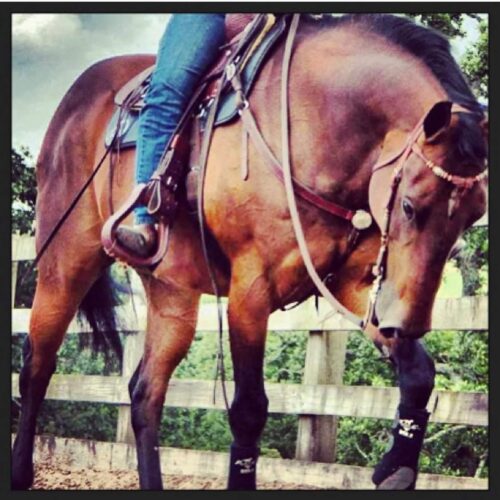 Liz has continued to treat Pepper at three to six-month intervals, which is a suitable length of time for her given the underlying conditions and her typical response to each session.  Liz states, “Over the years I  have advised Pepper’s owner to carry out the various strengthening exercises, stretches and ROM exercises – she is a very attentive owner and follows all advice.  We have been able to avoid further surgery by maintaining a regular treatment schedule and by encouraging the horse to work in a correct manner over her back.  Pepper will let her owner know when she is ready to see me by biting her foot when she gets on!”.

Catherine concludes “I am so happy because I now have a horse who wants to work.  When the arthritis that had been present in Pepper’s right hock as a youngster started to flare up and cause difficulties Liz worked alongside recommendations and treatments from my vet and farrier and Pepper has gone from strength to strength.  Pepper is 18 years old now and is still going strong.  It is all down to the McTimoney treatments, had I not found Liz, or McTimoney I know it would have been a very different story and Pepper would have been retired without a doubt”.

Read Absolute Horse - July/August 2022 by Absolute Horse Magazine on Issuu and browse thousands of other publications on our platform. Start here!
View on Facebook
· Share

Look who is in this months edition of The Dog Sport UK Magazine! McTimoney Animal Chiropractor Beth Absolon who attended the Retired Greyhounds Gala at Owlerton Stadium Sheffield recently to show visitors to the event what chiropractic for animals was all about and help support the Greyhound Trust. Beth Absolon McTimoney Animal ChiropractorCheck out www.dogsportsuk.com/shop A great magazine that will be featuring McTimoney regularly so don't miss it! ... See MoreSee Less