Lula the West Highland terrier, now 8 years old, was diagnosed by her vet with Hip Dysplasia when she was just 5! Lula’s vet, Robert Elliott – Court Vets, Farringdon, recommended adding McTimoney chiropractic to the hydrotherapy she was already partaking in.

Her owner Pat took her to McTimoney Animal Practitioner Jess Harkness who explained, “I found mainly compensatory muscle spasm either side of spine, shoulders, lumbosacral area and also performed some adjustments in the neck, early back and lumbar spine. Despite the diagnosis of hip dysplasia, the pelvic area was not an issue, but Lula was completely jammed up and uncomfortable throughout the rest of her body. She was only walking 100 yards then refusing to move from a sit. She was also sitting with her right hind underneath her and although she had HD in both hips, there was arthritis in right hip which was clearly making her compensate in this way.”

Prior to being treated by Jess, Pat explains that Lula had stages when she wouldn’t walk at all. By this time Lula was already doing hydrotherapy and had had one course of cartrofen injections and K Laser but Pat wanted to try to help her in every way and get some normality back in her life.

The combination of hydrotherapy and chiropractic treatment was given intensively initially and then gradually Jess was able to increase the time between treatment, so Lula now has quarterly treatments every year. 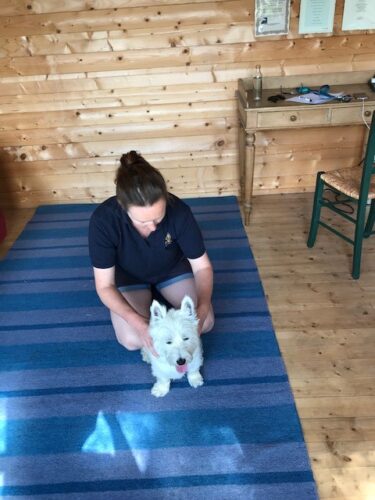 Jess she saw Lula every three weeks initially for 6 sessions, then gradually increased duration between treatments. Jess was also able to talk with Pat about joint supplements and develop a rehabilitation programme using a tracking app downloaded on her phone to allow Pat to see how far she walked. Pat was also advised to consider a diet to support joint health and weight loss, whilst continuing with the cartrofen injections with her vet.

McTimoney chiropractic treatment works by assessing the asymmetry within the body, using bony landmarks in the spine and pelvis, to determine where treatment needs to be targeted.  By improving the symmetry to the spine and pelvis, improved joint function can return, tension in the muscular and soft tissues is released and the animal feels much more comfortable again. Combined with individually bespoke rehabilitation exercises, the treatment can provide long-term benefits by promoting improvements in muscular strength and joint function which support rather than compensate for the original issues such as arthritic joints or other underlying pathologies.

Jess says, “You can now see a change in how she presents each time, and treatment is generally now for maintenance and small compensatory issues. Initially Lulu’s back was in spasm and she was walking with her back feet almost tripping over each other, but now she walks normally and can happily tolerate doing 5-6km walks. Her muscle tone has improved, and she has improved flexibility throughout the spine and limbs too; there is lateral movement swing in her spine now and she stands four square rather than paws together in back legs. Lulu sits straighter as well.” These are all key indicators that Lulu is feeling more comfortable, and the treatments are successful in negating the ongoing compensatory issues from her HD and arthritic right hip.

The collaboration between the hydrotherapy, veterinary and chiropractic care demonstrates clearly how this multi-disciplinary team approach can make such a significant difference. 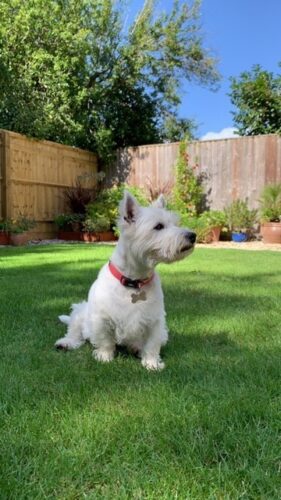 Pat states, “Jess has magic hands and was good at helping change Lula’s diet and advised me about supplements. I now get lots of comments on how happy and healthy-looking Lula is!” Her diet includes a lot of fish oil too which has helped the mobility and Lula’s overall quality of life is substantially better – she is now a demanding little terrier and she likes to greet her owners, play with husband John and squeaky toys.

Pat says she would always recommend Jess; “She is marvellous!”

As an Animal Physical Therapist Jess Harkness uses a range of techniques including McTimoney Animal Chiropractic. Jess helps horses, dogs and cats regain and maintain their full mobility. For over 17 years Jess has been helping a large number of animals – relieving their musculoskeletal problems, allowing optimum performance, health and soundness.

Jess is a member of the McTimoney Animal Association and the Animal Health Professions Register.

Free webinar 27th January 7pm from the McTimoney College of Chiropractic "Why Horse 'misbehave' - the role of McTimoney treatment"For more information on this free to attend, online event and to reserve your place click on the link below. #mctimoneyanimalchiropractic ... See MoreSee Less

The McTimoney College of Chiropractic is delighted to announce a free webinar on the 27th January 2022 investigating why horses ‘misbehave' and the role of McTimoney treatment.We all know that horse...
View on Facebook
· Share