Kitten triumphs over adversity with the love of a determined owner and a helping hand from a McTimoney Animal Chiropractor.

This story all began with an underweight stray cat turning up in the garden of Mo Stanhope from Salisbury in Wiltshire.   Having searched social media within 24 hours Mo had located the cat’s owner, who as it happened it turned out to be her neighbours indoor Egyptian Mau cat who went missing almost 5 weeks ago. Mo was delighted to be able to reunite them.

Fast forward a few weeks and Mo’s neighbour told her the 6-year-old cat was pregnant, presumably as a result of her escapades. Subsequently 7 kittens were born but unfortunately, only 3 survived, 2 male and a female. As an experienced pet owner Mo offered any help and advice should it be needed.

Mo first saw the kittens when they were about 6 weeks old and noticed that although the female, Tilly, looked and behaved normally she was wobbling a little. This behaviour worsened over time and the owner contacted the RSPCA for help as Tilly was now dragging her legs and was incontinent. She didn’t hear back and called Mo to ask if she could assist because she didn’t know what to do and had limited financial means. 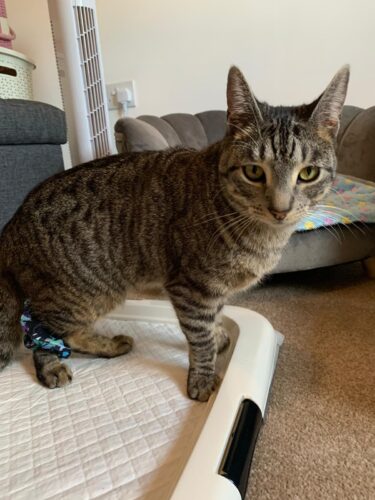 Mo said, “my initial concern was a spinal trauma although it was now 12 weeks since the onset of the original symptoms”.

Mo agreed she would take over ownership of Tilly and immediately took her to a local vet who, despite it being during the first covid lockdown saw Tilly within 1 hour. Mo described her observations of Tilly as unable to make any meaningful or co-ordinated movements from the front legs down, generally failing to thrive, underweight, agitated, and exhausted. The vet advised an initial treatment plan of Metacam and strict crate rest. He asked to see Tilly again in 2 days for an x-ray.

Following the x-ray a diagnosis of malformation the spinal vertebra in the mid back (T10) was given. The vertebra in that area of the back had not formed in the shape expected which led to instability in this area and in turn applied pressure on the nerves thereby causing the symptoms seen. The vet also sent the x-ray to a regional centre used for diagnostic imagining who agreed with the diagnosis.

The assumption made with this type of malformation was that poor Tilly may have been squashed in the womb. The regional centre advised they were willing to operate when she reached a year old.

Mo said “At the time I had concerns because Tilly had lost 140g in weight in 2 days, weighing 285g and was deteriorating. She was expending all her energy in attempts to mobilise. She had been constipated but on day 2 had a significant bowel movement and I deduced this was the majority of the ‘weight loss’. Tilly felt pain and discomfort, but this was positional”.

“I started feeding every 2-3 hours and introduced hourly bottle feeding as she had become very sleepy and reluctant to feed. This continued for a week until she returned to regular feeding. Despite this she was only maintaining a 40g weight increase per week”.

Tilly was seen weekly at the local vets and various options were discussed as well as her likely prognosis despite surgical intervention.

At 22 weeks old, and Mo felt interventions were still worthwhile. She questioned the efficacy of waiting 1 year for surgery because a) the spinal pressures were likely already high and b) no surgical stats were available to indicate successful outcomes.

Mo decided to Initiate a specialist referral to Fitzpatrick’s Referrals a state-of-the-art referral centre specialising in the treatment of orthopaedic, neurological, oncological, and soft tissue conditions. Two weeks later Tilly had CT and MRI scans that confirmed kyphosis associated with T10 cuneate vertebra, noting spinal pressures were very high.  The options given were to watch-and-wait, surgery or euthanasia.

Mo said “I was given the full facts to make my decision and felt under no pressure. I opted for surgery to stabilise the vertebra from T7 to T13 with T8 to T10 laminectomy”. In August 2020 Tilly had her operation, aged 26 weeks and weighing in at 2kg.

The post operation regime given was strict crate rest until a re-check in 4-6 weeks with physio as appropriate after 2 weeks and hydrotherapy if deemed appropriate. Tilly started her physiotherapy rehabilitation programme in October 2020 hydrotherapy in February 2021.

Tilly continued with regular hydrotherapy as her strength and capability continued to increase. She started at 6 lengths and now routinely completes 38, plus her regular poolside strengthening exercises. She began to make progress at home too, walking in her frame and harness, climbing on the sofa, and negotiating the stairs with ease.

Mo said “I felt she was ‘missing’ something more localised as my exercises with her or the specialist rehab support wasn’t improving her intermittent hind leg spasms/contractions. I also recognised I didn’t have the skills to know what to do but could actively support any specialist treatment she had.  I felt she needed a specific therapy to work on realigning her spine.

“Having benefited myself from chiropractor services for a severe shoulder injury, I was aware of McTimoney for animals, so looked to better understand if this could help Tilly in a similar way. I contacted a friend who is an experienced chiropractor and they confirmed I was on the right ‘animal’ track.  That is when I found Sheri Pinkey, an McTimoney Animal Chiropractitioner”. 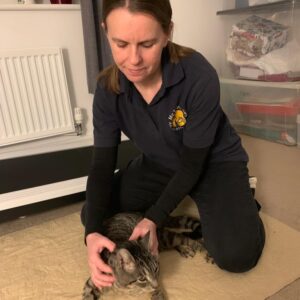 By manipulating any misaligned joints throughout the body, with special attention to the spine and pelvis, Sheri uses the non-invasive, holistic McTimoney chiropractic technique to help restore and maintain health, movement, soundness, and performance for horses, dogs, and cats.

Sheri told us “After Mo got in touch with me, I contacted her vet to ask permission to treat Tilly who is not currently on any medication. This is usual practice for McTimoney Animal Practitioners”.

“Although fixation surgery was successful, it is often the case that remaining neurological deficit becomes apparent many months down the line, as in Tilly’s case”.

“I have been treating Tilly since May 2021 and see her once every three weeks. During each treatment session I test her neurological responses to pain, paw awareness and foot placement.  After only two or three sessions I found a positive improvement to each test and noted a huge improvement to her hind limb strength and co-ordination”.

Mo says “After just 3 focused sessions with Sheri we saw a marked improvement in Tilly’s overall strength and capability, which was very encouraging. This was also noted by the specialist practice, who share the same progress observations”.

“I couldn’t be happier about the progress Tilly is making in response to Sheri’s treatment for Tilly. Her general health and well-being have significantly improved too. She has turned into an exceptionally happy young lady and gets up to lots more mischief. I often have to stop her exercises as she is keen to keep going!” 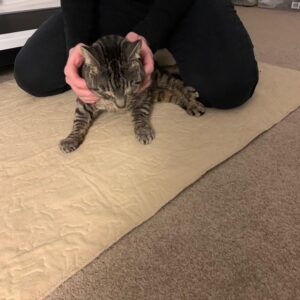 “I have would have no hesitation in recommending the McTimoney Animal Treatment and Sheri’s McTimoney Animal Chiropractic services. We are very grateful for her expertise and look forward to continuing to work with her”.

McTimoney chiropractic treatment works by assessing the asymmetry within the body, using bony landmarks in the spine and pelvis, to determine where treatment needs to be targeted.  By improving the symmetry to the spine and pelvis, improved joint function can return, tension in the muscular and soft tissues is released and the animal feels much more comfortable again. Combined with individually bespoke rehabilitation exercises, the treatment can provide long-term benefits by promoting improvements in muscular strength and joint function which support rather than compensate for the original issues such as arthritic joints or other underlying pathologies.

If you would like to know more about how to train as a McTimoney Animal Practitioner, please visit the McTimoney College of Chiropractic at www.mctimoney-college.ac.uk/postgraduate-studies/msc-animal-manipulation

For more information on the McTimoney Animal Association and to find a practitioner near you go to https://mctimoneyanimal.co.uk/