Jack has been a regular patient since 2013, and for the first few years he only required routine 3-6 monthly checks. He had been previously mistreated and as a result was backed fairly late. He also had a weakness in the left hindquarter, so usually required chiropractic adjustment of the left side of his pelvis, as well as small routine corrections elsewhere. This is not uncommon in working horses as, much like us, horses tend to have a preferred side, and with the addition of rider, tack and conformational factors amongst others this can result in mild, sub-clinical but ultimately important changes in the range of motion of joints and associated tension in the muscular and soft tissue systems which can effect performance. Chiropractic adjustments such as those used by McTimoney Animal Practitioners are light and highly effective at improving range of motion in joints which have reduced mobility and rebalance the skeletal system so symmetry is achieved again. This also influences the muscle tone of the superficial and deeper postural muscles, alleviating associated discomfort for the horse and enabling them to move more freely. 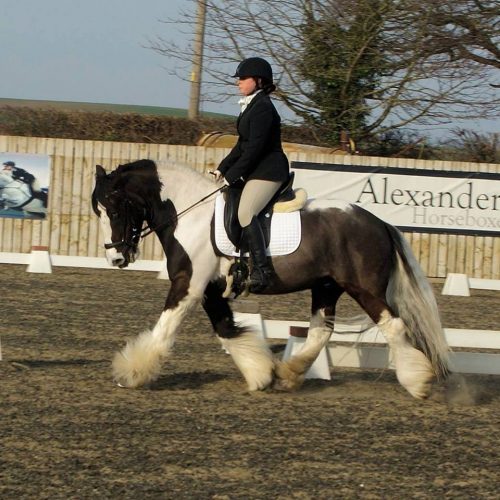 However, in December 2016 Jack’s owner reported that he felt unlevel in the hindquarters, had started to buck and was reluctant to work into a contact. I expressed concern that he was more tense than usual in the late thoracic and lumbar areas, was tender at the right tuber sacrale and had an abnormal, camped-under posture. Additionally, his pelvis was misaligned ventral and caudal on the right-hand side, which was not usual for Jack. I did not feel he responded sufficiently to treatment and advised that he had a lameness workup with the vet. McTimoney Animal Practitioners only work with veterinary permission and are highly trained to recognise symptoms of underlying pathology which required veterinary diagnosis and intervention.

The first lameness workup identified bilateral hock DJD and back pain. His hocks were medicated. Unfortunately, after this he developed a forelimb and left hind lameness and at his next assessment with me (Feb 2017) I found that his back was tense bilaterally throughout the longissimus dorsi, and extremely painful at T15-16. He was very resistant to pelvic tuck reflex, which was unusual for him. There was bilateral gluteal tension and tenderness at left tuber sacrale. He also had increased bilateral tension in the neck and shoulder area – particularly brachiocephalic, ventral cervical serrate and subclavius. I noted that the left hind lameness was worse when on outside of a circle. These findings are consistent with compensatory patterns of loading associated with underlying pathology, and the worsening of the left hind movement may also be related to either improvement in the right hind gait parameters, or the progression of disease in the left hind. 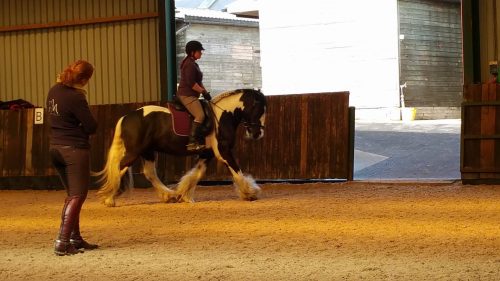 The second lameness workup took place shortly after my visit in February 2017, and Jack was diagnosed with bilateral proximal suspensory desmitis in the hindlimbs (worse on left hind), sacroiliac pain and back pain caused by mild impingement of the dorsal spinous processes, in the area I had identified. Jack had neurectomy and fasciotomy surgery to both hindlegs, remedial farriery, and later on he also had his hocks, sacroiliac joints and back injected. Medication of the back was not successful and so Jack’s Vet performed an inter-spinous ligament desmotomy. This case shows the importance of correct veterinary diagnosis of the cause of pain in a horse and emphasises again why McTimoney Animal Practitioners will refer such cases back to the vet for a full work up.

At my session with Jack in June 2017 it was noticed that he had started to trip with his front legs. This did respond to remedial shoeing initially but worsened again in 2019 and Jack was diagnosed with coffin joint inflammation which has been treated by altering his remedial farriery and medicating the area. I was able to complement the Veterinary treatment by alleviating areas of compensatory tension in Jack’s neck, shoulder and back. Alleviating compensatory patterns allows the body to rehabilitate to correct movement patterns and relieves discomfort caused by tight muscles and joints which have been taking more of the strain from uneven loading. Common areas are the lumbar region for hindlimb lameness, and shoulders and neck when compensating for forelimb pain.

Throughout this time, Jack’s Vet remained in support of me treating Jack with McTimoney, massage and class 3B Laser. She checked Jack regularly and communicated to the client when he developed areas of soreness or compensation in between our scheduled sessions and advised the client to schedule additional appointments. During the course of Jack’s rehabilitation, I was able to assist his owner in developing an exercise plan incorporating remedial exercises, as well as showing the owner how to massage and stretch key areas. A good relationship between vet and therapist is invaluable in maintaining the welfare and quality of life for our animals. All members of the McTimoney Animal Association follow a strict code of professionalism in this respect and are fully insured to cover all manner of complex conditions in conjunction with the veterinary interventions deemed necessary.

Client statement:
“Jack is my 14-year-old, 14.1HH Traditional cob who I have owned since he was 6 years old. Jack has had a history of rough handling, and bad experiences and it has taken a long time for him to learn to trust people. Over the years, Jack and I have competed British Dressage and shown, qualifying for CHAPS, TOYS and also competed at County shows. Jacks biggest achievement was becoming reserve dressage champion at the Traditional of the Year show in 2014.

Liz Harris has been seeing Jack routinely throughout Jack’s ridden career, as he has always suffered with pelvis misalignment which has always affected his canter on the right rein. Her treatments have been paramount in keeping Jack fit and healthy, and regular treatments paid a large part in his competitive successes. However, in 2016 Jack started to show small signs of discomfort, nothing that anyone could put a finger on, but knowing him so well, I knew he wasn’t just being naughty. My first port of call was Liz, and she identified a small area of discomfort in the middle of his back. Liz recommended we discuss this with the vet, which we did. At this time, the vet diagnosed Jack with Hock DJD and he had his hocks medicated. However, during this treatment Jack became noticeably lame, and so further investigation was necessary. At this point in early 2017 Jack was diagnosed with Hock DJD, hind limb Proximal suspensory desmitis and mild kissing spines, in the area Liz identified in the mid-back. 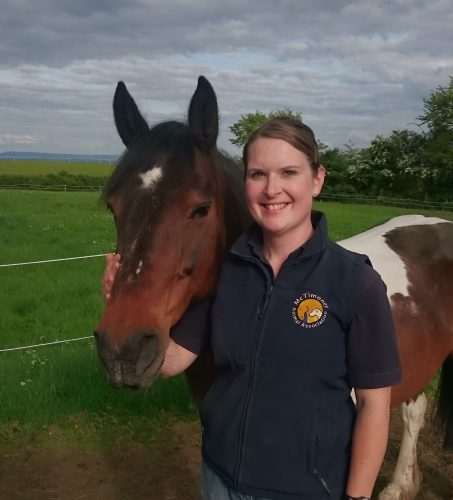 Jack has had a very long, slow, and careful rehab after having his hocks medicated, surgery on his PSD, and kissing spines. Jack’s Vet (Minster Equine) has always recommended regular treatments by a McTimoney practitioner as she is a big supporter of the treatment. The vet recommended regular visits as part of the rehab program, and Liz’s support throughout this has been invaluable. The vet has always asked to see Liz’s report after treatments, and these reports have been a valuable tool for both me and the vet, giving us the “bigger picture”.
In the early days of rehab, Liz found numerous areas of discomfort in all areas, however as the rehab continued these areas decreased. Liz was also able to offer us rehab exercises, stretches and pole work to help strengthen any areas of weakness or muscle atrophy noticed in the sessions. Seeing a positive improvement and knowing Jack wasn’t developing soreness in alternative areas to compensate for discomfort has been a great comfort to me. Also knowing that throughout the rehab program he is as comfortable as possible has enabled me to continue bringing Jack back into work knowing he is happy and healthy.

Jack has sadly had another setback in 2019 developing coffin joint inflammation, which once identified and treated by the vet, has improved through the McTimoney treatment and sports massage Liz offers, helping reduce any neck and shoulder discomfort associated with the front limb soreness.

Jack is now schooling nicely under saddle and has competed in a dressage anywhere competition in which he scored 71%, so we are hopeful for a modest return to dressage. Liz’s visits are extremely important in helping both to keep Jack healthy, but also helping us monitor for any new areas of soreness that may indicate either veterinary issues, or perhaps compensation through the work. I could not have brought Jack back into work if it was not for the excellent veterinary care and of course the ongoing support from Liz who we see as regularly as we can, it has been a great team effort. “