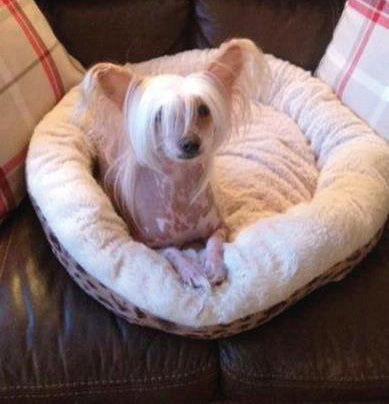 Poppy, owned by Natallie Waite, was diagnosed with Legg Perthes disease of her left hind limb in early 2013 after having lameness issues. Natalie describes how “at around 9 months old she stopped using one of her back legs and would just hold it up. X-rays showed Poppy’s hip joint hadn’t formed properly and she needed an operation to correct it. The operation went fine, but for weeks afterwards Poppy still refused to use her leg.

There was barely any muscle on it and I was starting to get worried, so my vet put me in touch with McTimoney Animal Practitioner, Jessica Guest.” In fact Poppy was only weight bearing on the limb a maximum of 5% of the time. Jessica says, “On my first visit to see Poppy it was apparent that she was very guarded around her left hind, and along with muscle atrophy she also had a lot of spinal misalignments and muscle tension due to persistently not using her body properly, to the extent that her whole body appeared to be twisted.

We took our first visit very slowly so that Poppy learnt to trust what I was doing and along with McTimoney manipulation techniques I also used massage and stretching exercises. I left Natalie her owner with some exercises that she could do daily with Poppy in order to make her more comfortable and encourage her to start using her leg more.” Natalie continues, “After just one half hour session with Jess stretching and massaging her leg Poppy started to put her leg down, although it was only now and again.

I continued with the exercises Jess had shown me and Poppy started to use the leg more and more. Poppy had another session with Jess again the same stretches and exercises and Jess had noticed Poppy’s muscle starting to build, by the third time Jess came to see Poppy she was running around on all four legs, she had piled weight on and her leg muscle was much stronger. Poppy keeps improving, she’s back to her normal happy self finally and I honestly think this would never of been the case had it not been for Jess, I’m amazed and delighted and would recommend her to anyone!”