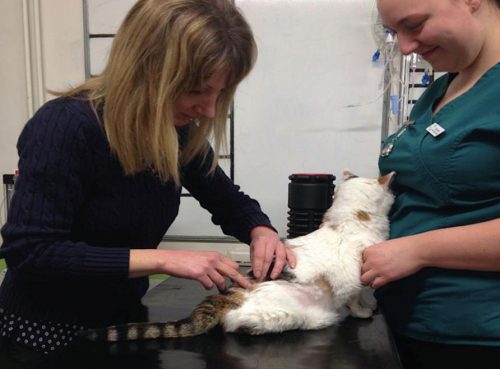 Registered veterinary nurse, Emma Leaver, has owned her 21 year old cat, Frankie for fifteen years. Frankie didn’t have the best start in life, Emma said, “Frankie was mistreated by her former owners and so went the Faith Animal Rescue Centre in Hickling. When she first arrived she could be grumpy and didn’t seem to really like people, which was of course totally understandable”.

Soon, Frankie became an important member of Emma’s family, Emma continued, “I was living at home when we first got Frankie. She was however very much my cat and was soon sleeping on my bed. Frankie has been very adaptable as I have moved house a couple of times since then and she has made the transition into new territories very easily. Very little phases her and she combines this with her wonderful fiery nature!”

However, as Frankie has got older, she has been suffering from arthritis and a digestive problem. Emma said, “I was starting to get worried about her as she was having prednisolone for her digestive problems and Tramadol for her arthritis. This was no life for her as she was starting to really resent having tablets twice a day. She had also started to get quite immobile and was sleeping a lot and generally being inactive”. 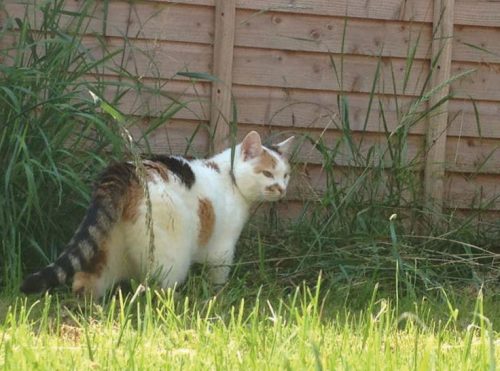 Through her job as a veterinary nurse at the Old Golf House, Emma had spent time speaking to registered McTimoney Animal Practitioner, Claire Lawrence. Emma continued, “Claire mainly treats horses and dogs with McTimoney and I had heard lots of really positive feedback about the effect of the treatment. I discussed Frankie with Claire and we decided that Claire should give her a treatment and we would see how it went. Frankie can be quite fiery and so I was delighted to see that she enjoyed the treatment”. Claire found that Frankie had misalignments of her cervical vertebrae, lumbar vertebrae and a tilted pelvis. Emma said, “Claire worked her way down Frankie’s spine, gently realigning the vertebrae and helping her spine return to its full range of movement”.

Further to her first McTimoney treatment, Emma was able to reduce Frankie’s pain relief and following two subsequent treatments Frankie is no longer on any medication. Emma said, “It is great that Frankie’s standard of life is so improved. She is back to her normal self and she is so much more active and friendly. In the last couple of weeks she has started sitting in front of me and lifting a paw to tap me with which she has never done before”.