Following a brutal dog attack which left Banjo, a four-year-old Lurcher, terrified and facing a long period of rehabilitation, McTimoney treatment has seen him return to his old self and back competing in agility, just months after the accident occurred. 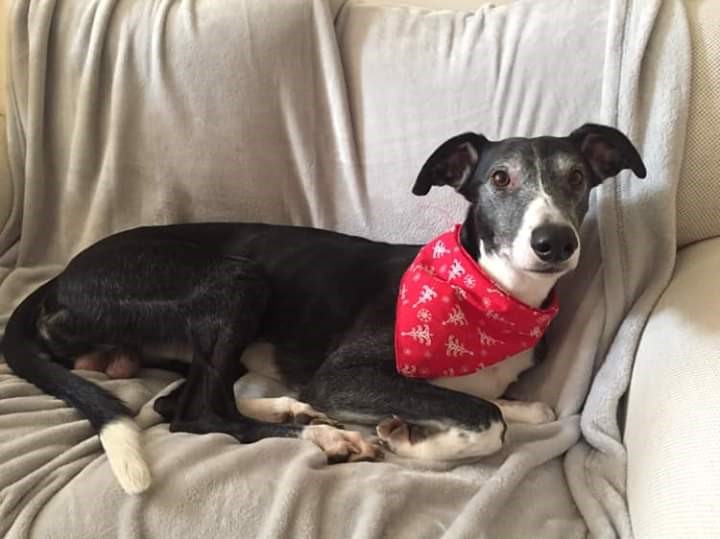 Whilst walking to a routine vet appointment with his owner Trina, Banjo was suddenly attacked by another dog who had got loose from a house on the residential street they were on. The dog latched onto Banjo, pulling him up the road for several metres. It was a vicious attack, with Banjo suffering deep puncture wounds to his neck and with a large haematoma in his jugular, which was also torn. An MRI scan showed extensive soft tissue damage. He had a drain placed and bandages applied to enable the wounds to heal. Surgery to close the wound was decided against, as Banjo’s vet did not want to distress him further, but once his drip had been removed and the wound bandages were taken off, it was decided by Trina that physiotherapy treatment should be sought as soon as possible.

Chloe Adams, a registered McTimoney Animal Association practitioner, began visiting Banjo in July last year, just a few weeks after the attack. On initial assessment, Chloe discovered that Banjo was very stiff through his body and quiet in his personality. He was sensitive to be palpated around his neck and shoulder areas and when asked to walk, was reluctant to extend his left shoulder, instead, shifting body weight onto his right hind leg. It was clear that Banjo was compensating for the area of injury.

‘Banjo presented with a large amount of tension through his neck and there appeared to be damage to the muscle over the shoulder and the beginning of a more fibrous scar tissue forming’ explains Chloe. ‘This included the supraspinatus muscle in the upper back, omotransverse muscle covering the shoulder joint and the deltoid muscle, also in the shoulder, which I believed was affected the most.’ Chloe discovered that these muscles showed a deterioration, whilst the spinal nerves affecting shoulders, the brachial plexus, had also been avulsed by the injury. The right middle and superficial gluteal muscles were also tense, whilst the thoracolumbar fascia and the longissimus muscle were also notably rigid, especially on the right-hand side. Banjo’s pelvis also had a right-sided ventral rotation, resulting in a left-handed tilt. By adjusting vertebrae in his spine and simultaneously working on soft tissue, Chloe was able to release tension to make Banjo feel more relaxed and comfortable.

The McTimoney technique is a form of chiropractic manipulation which balances an animal’s musculoskeletal system to optimise the alignment of joints throughout the whole body and is therefore an ideal choice of treatment for animals suffering from back, neck, pelvic and musculoskeletal problems. With a focus of attention towards the spine and pelvis, the technique helps both to restore and maintain health, soundness and performance. All members of the McTimoney Animal Association are fully insured and work closely with vets to ensure a safe, appropriate and effective treatment takes place throughout every case.

Says Chloe, ‘I worked largely on reducing the scaring of Banjo’s damaged soft tissue and making him as comfortable as possible, as quickly as possible. By the time of my second visit, he was very excited to see me, and since knows how to stand or lie down whilst I am treating him.’ Four months on from the attack, Banjo continued to grow in strength, managing to run and play during exercise, and even enjoyed visits to the beach whilst on holiday with Trina. Most notable of all was Banjo’s return to competing in agility classes, which he had enjoyed regularly before the accident took place. 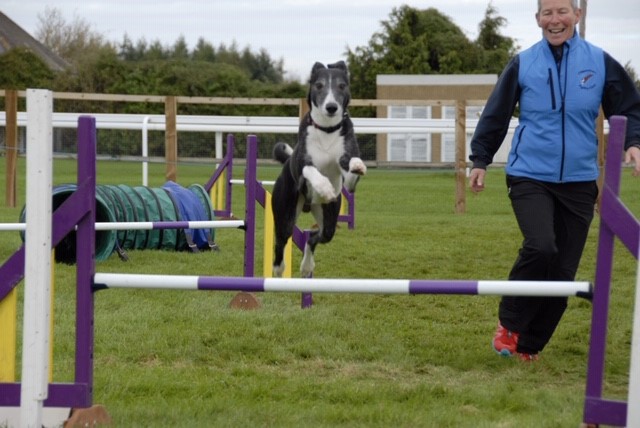 Says Chloe, ‘We took things slowly, taking care to rebuild Banjo’s strength organically so that he was not was put under pressure or strain’. The hard work and dedication paid off as in early January, Banjo took part in a competition for his local club, winning the class. Explains Trina, ‘Banjo was awarded the Kristy & Gipsy Trophy for ‘Best Dog Returning to Agility After Illness or Injury’. What made the award so special was that it was voted for unanimously by the Committee members and knowing how much they all realise just what our poor boy endured, means a lot’.

‘It was lovely to win Banjo’s trust so quickly following such a severe attack, and he obviously understood that what I was doing, was to help him’ says Chloe. ‘He is such a sweet natured boy and it has been a privilege to help him recover and allow him to go back to doing what he does best. I’m not sure who is more excited for my visits now, him or I!’

Trina and Banjo are looking forward to a busy agility season in 2019, and hopefully further success!